The Marjory Stoneman Douglas High School Shooting is a prime example demonstrating that existing systems do not work! Do you truly want to prevent future school violence using scientifically-validated methods that produce evidence-based Best Practice results? Here is how . . .

In order to achieve this objective with significant and measurable results, any solution must be tested, evidence-based and should be scientifically validated. The Center for Aggression Management’s Critical Aggression Prevention System achieves all of these solution attributes.

26 years ago, the Center for Aggression Management discovered how to identify someone “on the path to violence.” The most thorough study ever conducted on the topic of violence in schools was a collaboration between the US Secret Service, the Dept of Education and the National Institute of Justice. It was called the “Safe School Initiative Study” and it found that the only “reliable” way to identify a future shooter was to identify someone “on the path to violence.” It is the “Path to violence” that the Center for Aggression Management discovered 24 years ago. We scientifically validated our “Meter of Emerging Aggression” at Eastern Kentucky University seven years ago and over the past two years, with Israeli partners, we have developed a Mobile App Technology that incorporates these skills and knowledge in the palm of your hand. Teachers, students, parents and law enforcement can use this Mobile App Technology to identify someone on the path to violence and thereby prevent bullying, abuse, harassment and violence.

Mental Health Professionals play an important role in preventing future violence, but mental health “illness” and mental health “assessments” are not reliable “predictors” of who the next shooter will be. The Report to the President on Issues Raised by the Virginia Tech Tragedy, June 13, 2007 states: “Most people who are violent do not have a mental illness, and most people who have mental illness are not violent.” In fact, they found the people with mental illness were typically the victims of this behavior, not the perpetrators of it.

Unfortunately, we live with a “Hard Truth”: from the Moment of Commitment (when an assailant decides to pull his weapon and start shooting) to when the first round is discharged, is just 2 seconds. Within 5 seconds there will be dead, dying and/or wounded victims! There is no security or law enforcement, no matter how well trained that can get on scene in just 2 seconds. The best estimated time for law enforcement to arrive on scene is 6 minutes. They will arrive stepping over those slain during those horrific first few seconds. That is unacceptable! We must get out in front of the horrific Moment of Commitment and our Critical Aggression Prevention System (CAPS) can reliably identify someone on the path to that horrific Moment of Commitment and prevent it.

Reach out to us with any questions you may have: Email: JohnByrnes@AggressionManagement.com or Phone: 407-718-5637 Media Inquires go to: prevent-aggression.com. 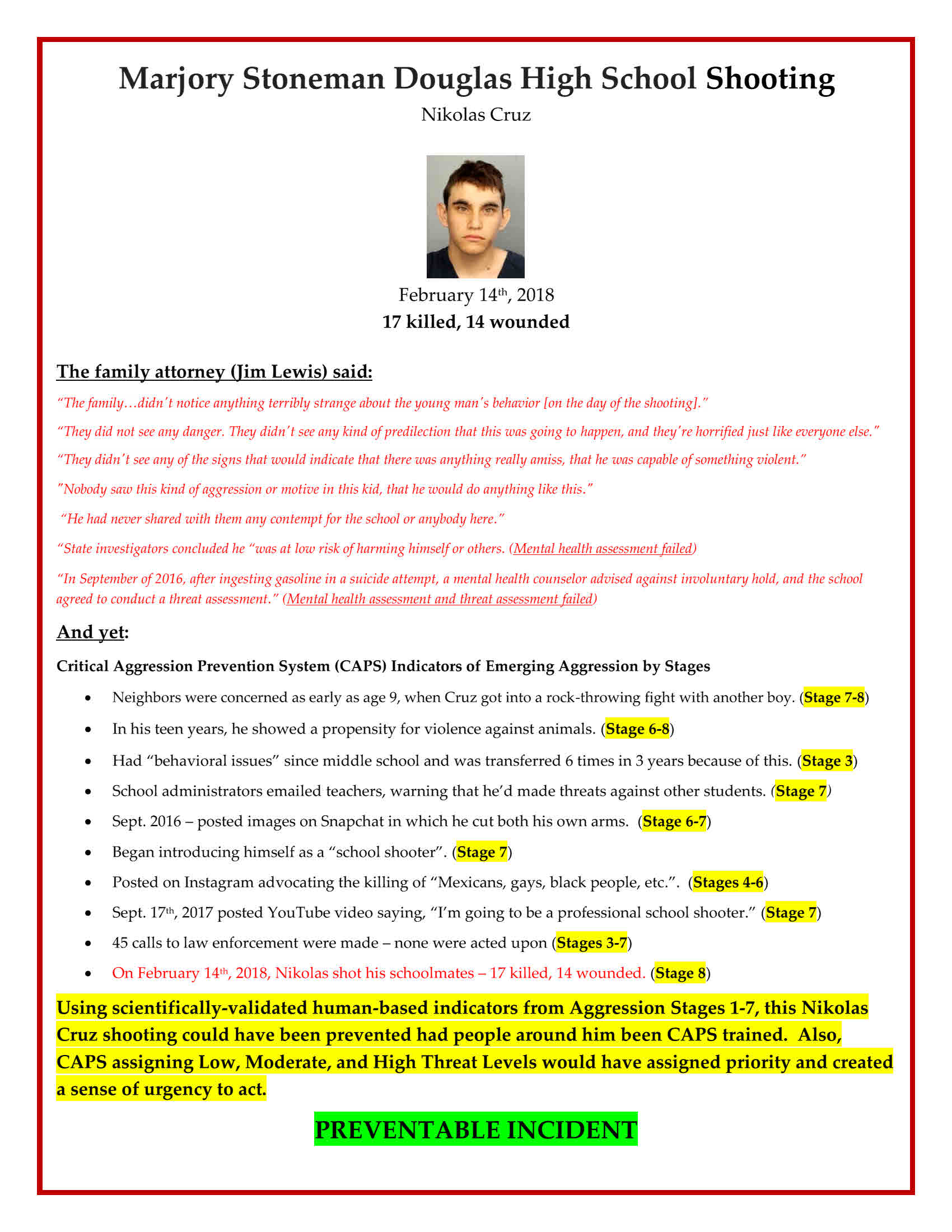 Click here to learn more about how to be trained in CAPS before it’s too late.